When Only the Moon Rages
Wayne James 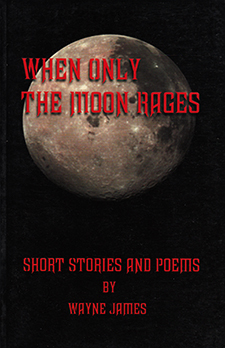 In this volume of stories by Wayne James, you will find creatures of the night, people of the stars, and individuals who dare to live in those dark places that few have the audacity to tread.

There's Lieutenant Lawry, an ordinary soldier who must fight to keep an unknown, violent creature from killing his men. Sergeant Frank Blacklin strives to keep children alive against insurmountable odds on a hostile planet. A man named Robert lives in a United States gone mad; where the enemies of the State are so numerous, their bodies are pushed into a gaping trench.

Other characters in James' stories follow more violent paths. A respectable business man falls for a woman turned on by crime. A lonely man deals with the odd neighbors down the street by buying an assault rifle.

You are invited on a voyage that occurs when only the moon rages!