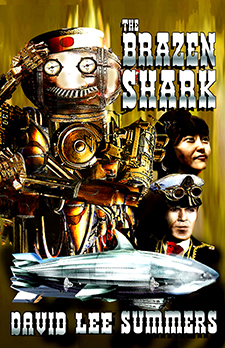 Pirate captain, inventor, and entrepreneur Onofre Cisneros sweeps his friends Fatemeh and Ramon Morales off to Hawaii for their honeymoon. Once there, a British agent makes Cisneros an offer he can't refuse and the captain must travel to Japan. Wanting to see more of the world, Ramon and Fatemeh ask to accompany the captain only to find themselves embroiled in a plot by samurai who steal a Russian airship, hoping to overthrow the Japanese emperor.

"Airships battling! Samurai fomenting war with Russia! Historical characters and powerfully drawn fictional ones mixing it up with political intrigues make David Lee Summers' The Brazen Shark a steampunk novel not to be missed. Put it at the top of your reading list. Now!" Robert E. Vardeman, author of Gateway to Rust and Ruin

"Pack your goggles and your telescope and your atlas because the Clockwork Legion is taking us on another whirlwind adventure. And this one covers the globe in the air, on the sea, on terra firma, undersea — and even into space!" David L. Drake and Katherine L. Morse, authors of The Adventures of Drake and McTrowell