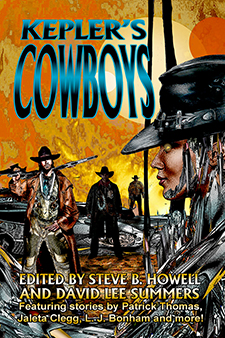 NASA's Kepler Space Telescope has discovered thousands of new planets.
Visiting, much less settling, those worlds will provide innumerable challenges.
The men and women who make the journey will be those who don't fear the odds.
They'll be Kepler's Cowboys.

Saddle up and take an unforgettable journey to distant star systems. Meet new life forms—some willing to be your friend and others who will see you as the invader. Fight for justice in a lawless frontier. Go on a quest for a few dollars more. David Lee Summers, author of the popular Clockwork Legion novels, and Steve B. Howell, head of the Space Sciences and Astrobiology Division at NASA Ames Research Center, have edited this exciting, fun, and rollicking anthology of fourteen stories and five poems by such authors as Patrick Thomas, Jaleta Clegg, Anthony R. Cardno, L.J. Bonham, and many more!