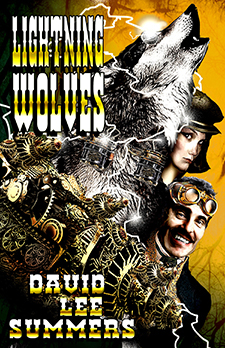 It's 1877. Russians have invaded the Pacific Northwest and are advancing into California. New weapons have proven ineffective or dangerously unstable and the one man who can help has disappeared into Apache Country, hunting ghosts. A healer and a former sheriff lead a band into the heart of the invasion to determine what makes the Russian forces so unstoppable while a young inventor attempts to unleash the power of the lightning wolves.

"The Old West as we wish it had been. Full of adventure and crazy inventions but with some honesty about the prejudices and mores of the day. This is as much alternate history as adventure tale, with an ethnically diverse cast fighting battles that never were. Appearances by a few historical figures, like Geromino, add spice. There's a poignant undercurrent on how inventions meant to lift humanity up can draw us into the same old quagmire of ambition and greed, plus an intriguing alien race trying to find its way through First Contact with humans. Nicely done." Deby Fredericks, author of Seven Exalted Orders