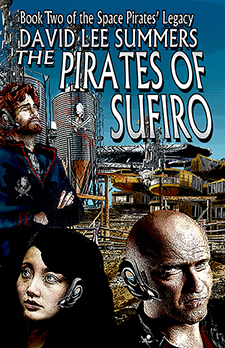 The Pirates of Sufiro is the story of a planet and its people—of Ellison Firebrandt the pirate captain living in exile; of Espedie Raton, a man from the streets of Earth looking to make a fresh start for himself and his wife on a new world; of Peter Stone, the geologist who discovers a fortune and will do anything to keep it; and of the lawman, Edmund Ray Swan who travels to Sufiro seeking the quiet life but finds a dark secret. It is the story of privateers, farmers, miners, entrepreneurs, and soldiers—all caught up in dramatic events and violent conflicts that will shape the destiny of our galaxy.

"When I first 'met' Ellison Firebrandt in Firebrandt's Legacy, the last thing I even imagined was a future where our hero and his devoted crew did not immerse themselves in swashbuckling space battles with clever intrigues played out against challenging opponents within the dark reaches of outer space. Firebrandt's creator, author David Lee Summers, was far more ambitious in the future he envisioned for his hero.
"In The Pirates of Sufiro Firebrandt faces challenges that press even his courageous heart and clever mind to the limit, as well as testing the loyalty of those he loves and trusts most deeply. This dynamic generational saga provides enough twists and turns to satisfy the most devoted space opera fan." Jane Lindskold, author of the Firekeeper Saga